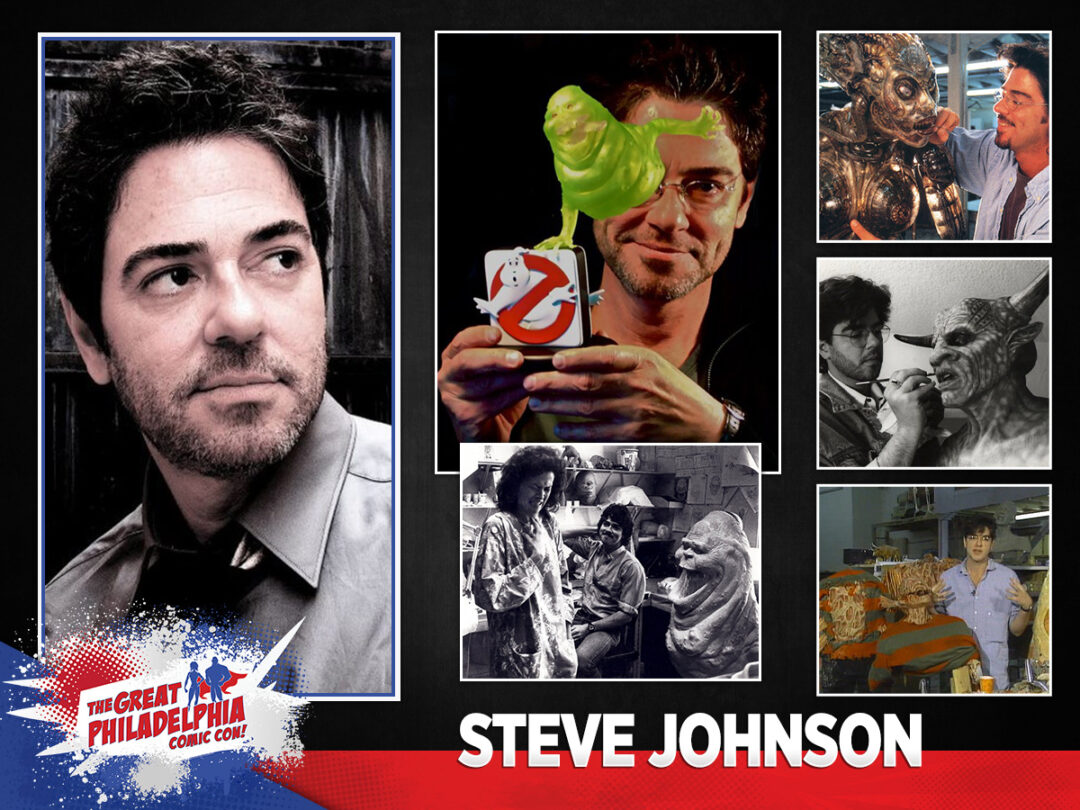 Steve Johnson is an American special effects artist whose career has spanned more than thirty years. His work has appeared in over 200 films, countless television shows, theme parks, commercials, and music videos.

Some of his best-known creations include “Slimer” for Ghostbusters, the alien seductress “Sil” for Species, the multi-tentacled “Doc Ock” for Spider-Man 2, and Robin Williams’ robotics for Bicentennial Man.

Johnson’s first job was with four-time Oscar winner Greg Cannom on The Galactic Connection, though the film was not released. He then worked on The Howling and two other films with Rob Bottin, after which Rick Baker hired Johnson as a member of the special makeup effects crew for the John Landis blockbuster, An American Werewolf in London. In 1982, Johnson worked on Ivan Reitman’s new project, Ghostbusters, where he created “Slimer” and the “librarian ghost”.

In 1982, he and visual effects artist Randall William Cook were brought in by Richard Edlund to create and run the special makeup effects studio at Boss Films, where they created characters for films like Poltergeist II, Fright Night, and Big Trouble in Little China.

Johnson started his own effects company in 1986 called Steve Johnson’s XFX. It was later renamed Edge FX. In 1989 Johnson worked on The Abyss, directed by James Cameron, which became one of the biggest blockbusters of the year. He created the “alien” creatures for the film’s climax.

During the XFX and Edge FX years, Johnson also worked on two Stephen King mini-series: The Stand and The Shining (1997), for which he won Emmy Awards. In addition, his company did four seasons of the TV show Outer Limits, three seasons of Stargate SG-1, and ultimately opened a studio in Vancouver called Pacific Effects Group. He also created earth-shattering illusions for several seasons of magician Criss Angel’s A&E television show, Mindfreak. In 2003, Johnson wrote, produced, and directed a short called Everloving, which played as part of the Brooklyn Film Festival.

For the film Innocent Blood (1992), Johnson innovated contact lenses that could glow and change color on command without digital after-effects. They were scleral lensescoated with silicone glass and Scotchlite, so that when lights, such as those from a color wheel were projected on them, the colors would bounce back toward the camera.

For Lord of Illusions (1995), horror master Clive Barker required Johnson to create an organic-looking creature with skin that could pulse, move, and morph without the use of stop motion photography or other techniques such as mold-casting that were industry standards at the time. Thus Johnson innovated a monster-making technique with Bill Bryan that employed plastic bags, old yogurt containers, colored methyl cellulose “slime”, and used gravity and liquid as a propellant. This technique is one that he modified time and again, such as for making slimy tentacles out of plastic and goop for the embryonic pods in Species (1995).