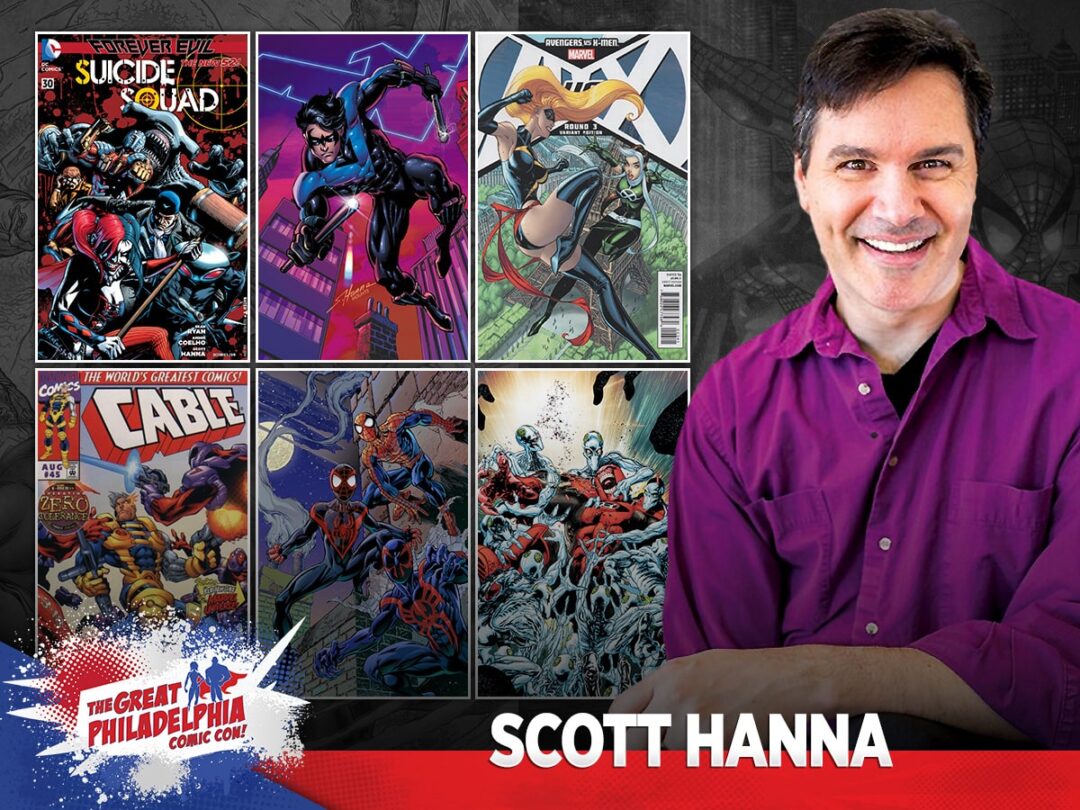 Instructor of fine art drawing, heroic figure drawing, inking with croquill & brush, sequential art & cartooning, Scott Hanna is a busy professional artist & top inker in the graphic novel industry. His drawing & inking work appears monthly in print for a number of superhero graphic novels and comics. One of the most prolific artists in the field, Mr. Hanna has inked well over 100 graphic novels for the top two publishers in the industry, or approximately 17,000 pages of graphic art.

At Marvel Comics, Scott’s worked on all the top characters at the company, including the Avengers, Spider-Man, Iron Man, the X-Men, Wolverine, Avengers vs. X-Men, and the Hulk. He’s drawn Spider-Man for fifteen years, working on almost every title starring the wall-crawler. At DC Comics, he worked on many of their major titles, including Superman, Justice League, Green Lantern Corps, and Suicide Squad and most notably a five year run on Detective Comics starring Batman.

Currently he is working on Iron Man and Guardians of the Galaxy for Marvel, Castle graphic novel for ABC-TV/Marvel Entertainment Group and Justice League, Suicide Squad, and Green Lantern Corp. for DC Comics.

Scott Hanna was recently awarded “Most Adaptable Inker” and “The Props Award” at the 2012 INKWELL award ceremony, becoming the most award-winning inker in the entire history of the INKWELL awards. Scott also received the 2011 Inkwell Awards for “Favorite Inker” and “Most Adaptable Inker”, the 2010 Inkwell Award for “Most Adaptable Inker,” the 2005 Wizard Fan Award for “Best Inker,” and the 2002 Eisner award for “Best Serialized Story” – Amazing Spider-Man #30-35: “Coming Home.” His work appeared in the Smithsonian Institute’s 9/11 anniversary exhibit in Washington D.C. with artwork from the book HEROES. He had a one man show at the Storefront Artist Project in Pittsfield, MA – “The Art of Scott Hanna,” and his art was featured in a 2010 exhibit at the Museum of Comic and Cartoon Art in NYC.

With guest appearances on national and local television, radio, museums, historical societies, libraries, the internet, and national and international comic book conventions, Scott has made a name as an accomplished lecturer. He authored an article on the “inking process” for Wizard magazine and taught sequential art at several local colleges and private art schools before helping launch the Arts and Fashion Institute™ in the Bucks County/Lehigh Valley area.

Scott Hanna is a third generation artist. His grandfather did manuscript and book illumination and his mother, Annette Hanna, is an award-winning portrait and landscape artist who will be instructing on portraiture and plein air painting at AFI™. Scott majored in illustration at Pratt Institute in NYC.