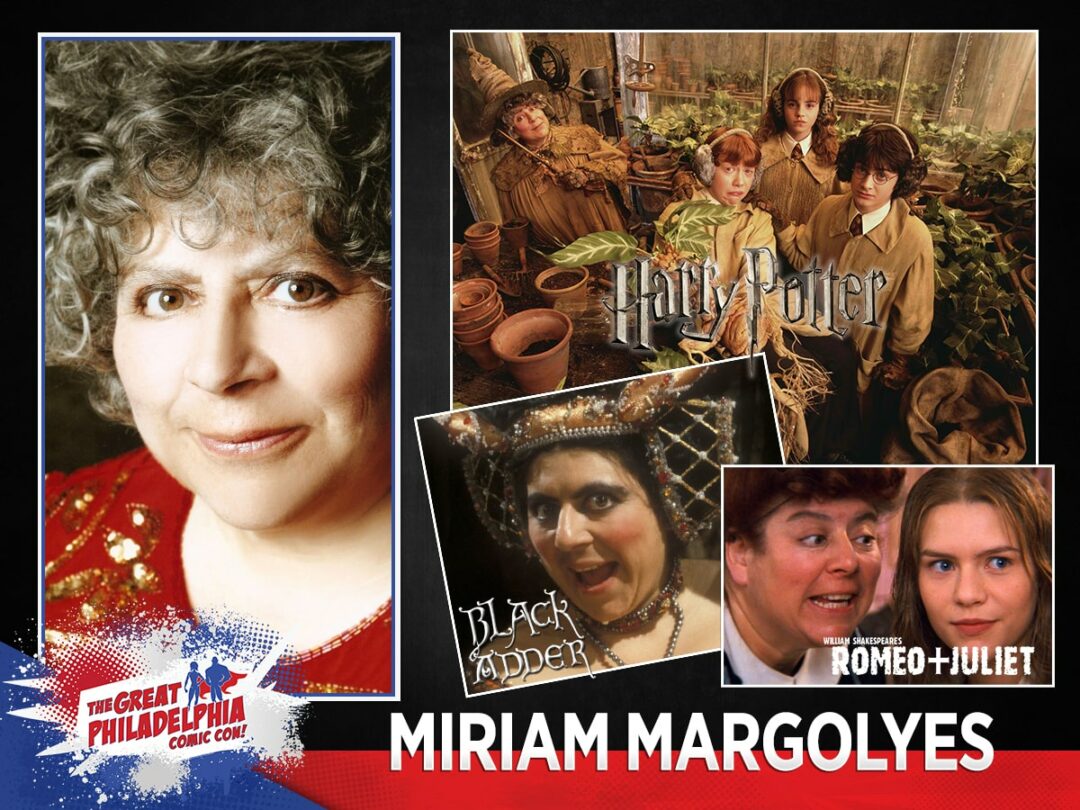 Born in Oxford, England in 1941 & educated at Newnham College, Cambridge, Miriam Margolyes is a veteran of stage and screen, an award-winning actress who achieved success on both sides of the Atlantic. Winner of the BAFTA Best Supporting Actress award in 1993 for The Age of Innocence, she also received Best Supporting Actress at the 1989 LA Critics Circle Awards for her role in Little Dorrit and a Sony Radio Award for Best Actress in 1993 for her unabridged recording of ‘Oliver Twist’. She was the voice of the Matchmaker in Mulan & Fly, the mother dog, in Babe.

Major film credits during her long and celebrated career include Yentl, Little Shop of Horrors, I Love You To Death, End of Days, Sunshine, Scorsese’s The Age of Innocence, Cold Comfort Farm & Magnolia. She starred in Stephen Hopkins’ The Life and Death of Peter Sellers, Modigliani, Istvan Szabo’s Being Julia & Ladies in Lavender (dir. Charles Dance, with Dames Smith & Dench). Margolyes was Professor Sprout in Harry Potter and the Chamber of Secrets and Harry Potter & the Deathly Hallows (part II). In 2013 Margolyes played lady Thyrza in The Legend of Longwood set in an Irish fantasy village and in 2014 she played Odamee Marshall in the heart warming film Outlier. In 2016 Miriam played Mrs Fisk in THE MAN WHO INVENTED CHRISTMAS opposite Dan Stevens, Christopher Plummer and Jonathan Pryce. Due for release in 2017.

Most memorable TV credits include, Old Flames, Freud, Life and Loves of a She Devil, Blackadder, The Girls of Slender Means, Oliver Twist, The History Man, Vanity Fair & Supply & Demand. She was Franny in the CBS sitcom, Frannie’s Turn & was a Guest Star in the Miss Marple episode, Murder at the Vicarage & in the BBC 3 comedy series, Coming of Age. Her 2004 BBC TV documentary series about Charles Dickens in 2004; Dickens in America was a worldwide success. In May 2010, she starred in the UK TV series, MERLIN. 2011 saw her playing Shirley Dunwich in DOC MARTIN. In Australia, during 2012 and 2013, she completed both series of THE MISS FISHER MURDER MYSTERIES for ABC. In 2014 Margolyes playes “naughty nan” Rose in Sky’s comedy series TROLLIED. 2015 will see the third series of The Miss Fisher Murder Mysteries, and Miriam worked alongside Richard Roxburgh in the acclaimed Australian hit-series, RAKE & the English comedy series, Plebs. In 2016 Miriam joined an all star cast in THE REAL MARIGOLD HOTEL for BBC 1 and the sequel THE REAL MARIGOLD on TOUR. She also narrated ITV’s Lady C and the Castle. 2017 saw Miriam in the Comedy series BUCKET playing the mother to Frog Stone

Stage credits include Madame Morrible in both the London & Broadway productions of WICKED, Madame Arcati in Blithe Sprit (Melbourne Theatre Company) Miss Prism in The Importance of Being Earnest at the Brooklyn Academy of Music (dir. Sir Peter Hall) , Lady Wishfort in The Way of the World at Sydney Theatre Company, The Vagina Monologues, Sir Peter Hall’s Los Angeles production of Romeo & Juliet, She Stoops to Conquer & Orpheus Descending in London (dir. Sir Peter Hall) The Killing of Sister George, The Threepenny Opera (Tony Richardson) & her own award-winning, one-woman show, DICKENS’ WOMAN, performed at Festivals in Edinburgh, London, Sydney, Jerusalem, Santa Cruz, USA, New York City, Boston & all over India. Most recently, she starred in Theatre du Complicite’s West End production of Beckett’s Endgame, playing Nell, for which she won the WHATSONSTAGE award for Best Supporting Actress for the second time. She played THE DUCHESS in the revival of ME & MY GIRL in December 2010. She starred in A DAY IN THE DEATH OF JOE EGG at the Citizens Theatre, Glasgow. In 2012 Margolyes once again completed a world wide tour of DICKENS’ WOMEN starting in Australia and New Zealand and touring around the UK and the USA. Returning to Australia in 2014 she then starred as Ana in the Adelaide State Theatre’s highest grossing production of NEIGHBOURHOOD WATCH. She starred in the Melbourne Theatre Company’s one woman play I’LL EAT YOU LAST as the indomitable Hollywood Agent Sue Mengers. In 2015 Margolyes toured Australia with her one woman show THE IMPORTANCE OF BEING MIRIAM, a passionate discovery of words and music.

In 2017 She played Helene Rubenstein in MADAME RUBINSTEIN at the Park Theatre.

Her voice work has been internationally acclaimed & she is regarded as the most accomplished female voice in Britain: she has recorded many audio books including Oliver Twist, Great Expectations, Alice in Wonderland & Alice Through the Looking-Glass, Matilda, Pinnocchio, The Worst Witch series, The Queen & I (one of the best-selling audio books in the world) The Little White Horse, The Sea, Troy & Wise Child ). She voiced many TV documentaries, including The Human Body, & numerous commercials, the most famous probably being the Manikin Cigar ads, the Cadbury’s Caramel Bunny & Dolly, the Chimp in the PG Tips Campaign. She is now the voice of Mama in the Dolmio TV commercials. She is also Nana Sheila in the Disney Mini Series NINA NEEDS TO GO.

Radio is a medium she excels in 2012-13 she completed series 1 & 2 of “THE GLOOMSBURYS” the radio parody of the Bloomsbury Group by Sue Limb for Radio 4. 2015 saw Series 3 come to air with more of Vera Sackcloth-Vest and the rest of the Bloomsberry Set, with Series 4 aired in 2017.