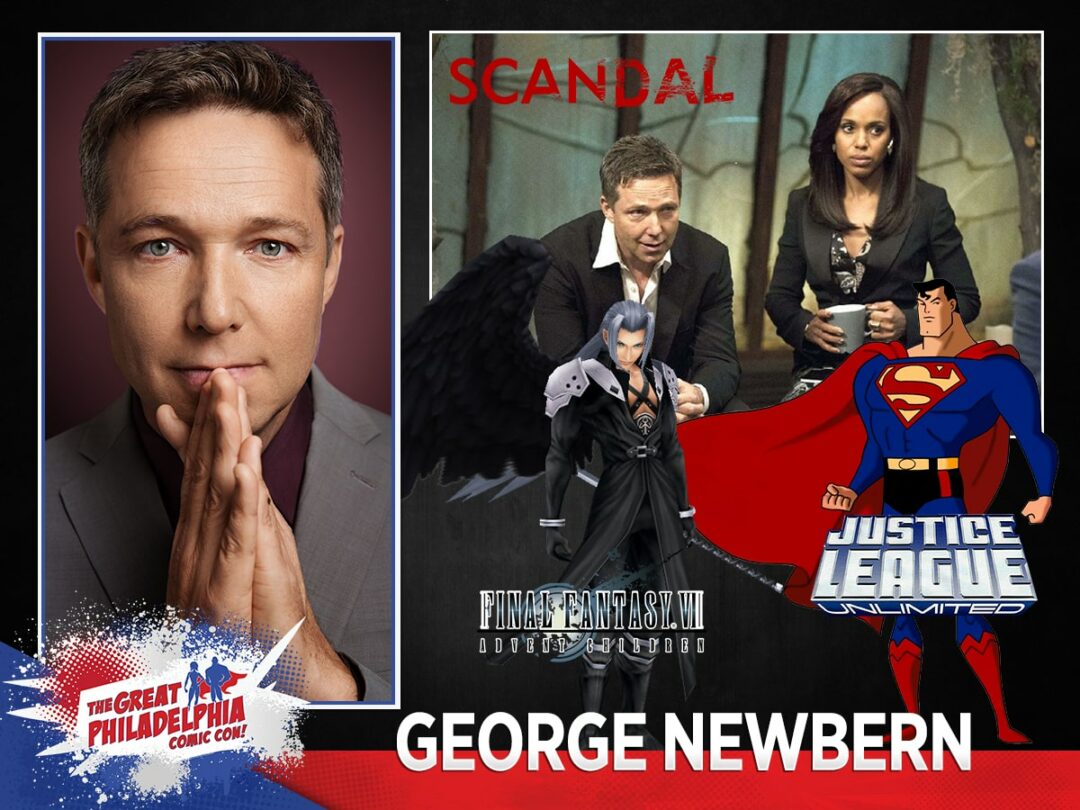 George Newbern is an American actor and voice actor, best known for his roles as Charlie in ABC show Scandal and Bryan MacKenzie in Father of the Bride (1991) and its sequel Father of the Bride Part II as well as Danny (The Yeti) in Friends and his recurring role as Julia’s son Payne in Designing Women. He is also known for providing the voices of Superman in many pieces of DC Comics media (most notably the Justice League and Justice League Unlimited animated series and the Injustice video game series), and Sephiroth in the Final Fantasy series and the Kingdom Hearts series.

He began his acting career at the Arkansas Arts Center in Little Rock, in the role of the younger brother in Life With Father, based on Clarence S. Day Jr.’s autobiographical novels. This first acting role spurred him on to other acting roles and eventually on to movie roles. Newbern’s first lead role was in 1987’s Double Switch, a retelling of The Prince and the Pauper that aired as a part of the Wonderful World of Disney television series.

From 1986-1992, Newbern had a recurring role as Payne McElroy, the son of designer Julia Sugarbaker (played by Dixie Carter), on the series Designing Women. He has since guest-starred on television in such series as Providence, Chicago Hope, Friends, Bull, CSI, Medium, Ghost Whisperer, Touched by an Angel, Criminal Minds, and Private Practice. He has a recurring role as a former CIA operative in Scandal.

He starred as Neal Morris, father of Melissa Morris (Emily Osment), in the 2009 Disney Channel movie Dadnapped, and portrayed Apollo 14 astronaut Stu Roosa in the HBO mini-series From The Earth To The Moon. Film credits include Adventures in Babysitting (1987) with Elisabeth Shue; Double Switch (1987); Switching Channels (1988) with Kathleen Turner, Burt Reynolds and Christopher Reeve; and Father of the Bride (1991) and its sequel Father of the Bride Part II. In 2009 he appeared in Locker 13.

As a voice actor, Newbern is notable for his role as Clark Kent/Superman on the Cartoon Network series Justice League, Static Shock and Justice League Unlimited. He also reprised his role as Superman in The Batman fifth season two-part opener “The Batman/Superman Story” and the series finale episode “Lost Heroes” even though that series was described as existing in a different continuity. He also appeared as Superman in the DC Showcase short Superman/Shazam!: The Return of Black Adam and as well as Superman vs The Elite. He also provides the voice of Superman in the game Injustice: Gods Among Us and its sequel.

Newbern’s voice acting career began in 1991 with the cartoon series The Pirates of Dark Water, and he has also done voiceovers on a number of video games and game-related productions. He has also voiced in the infamous Theodore Rex as the character of the same name. In 2003, Newbern provided the voice of Mevyn Nooj in Final Fantasy X-2.

He later appeared in the second season of Jericho as the President of the Allied States of America. In 2009, he sent a DNA sample into space to preserve the Newbern genome. Newbern also narrated Toyota’s commercials for the 2010 model year of the Prius, one of the car company’s younger automotive models, and portrayed Harold in Saw VI.